Well I’m not sure if most of you are aware, however, Attack on Titan returns April 28th!

I am thrilled, I knew it was confirmed for this month but I had not heard anything specific on the date. I know we still gotta wait a bit but it’ll be here before you know it. Maybe we’ll finally know what the heck is in the basement!?  We’ve only been waiting since 2013 (I know I know, read the manga right?)

Other than AoT, there are quite a few new shows coming out. It’s Spring anime season! 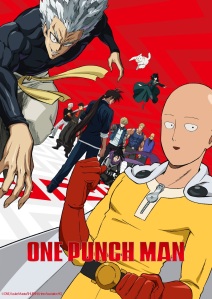 We have new One Punch Man, which while it’s under a new animation studio, and yes most people with eyes can see the difference, I still think it’s a very solid season so far. We’re just two episodes in so it’s hard to cast judgement but I feel it’s a very faithful followup to the first season already.

Bungo Stray Dogs Season 3 just started on April 12th, I have not had a chance to check out the first episode, I am literally loading up crunchy roll to see if they have it now. If you haven’t seen this show before it’s a fun take on the detectives who have super powers genre. One of my favorites, it reminds me a bit of the show “The Get Backers.”

I love me a good Pun. This show’s name is one so why not give it a try right?  Right! Having only seen the first episode so far I am inclined to continue to watch more. While some parts of it can be a bit cheesy, the premise is solid enough and the animations are quality. I enjoy the setting, feels a bit like early 19th century Europe, and you have a girl looking for her childhood friend taking great risk and joining up with a mobster family to do so. There’s a bit of magic and drama and bloodshed right off the bat. I’m going to stay optimistic and continue to watch this show.

Now for the show that is being meme’d to an extent that I don’t think anyone could have avoided it at this point. I attempted to watch it, I really did. I’m just not really into the fantasy. I’m sorry guys… I get it, fox people are cute, and adorable. It’s fun to imagine having a fox tail, I’ve even imagined trying out a fur-suit for fun, I love foxes. I’m just not really into the slice of life anime genre, and even mixing it up with an 800 year old adorable fox-girl spirit does not make it any more interesting for me.

One of them is a writer who always gets tricked out of his money in a get rich quick scheme, the other is a bit of a mystery, yet claims that everything is predictable and dull and he is bored. When their lives collide the story begins. Robi convinces Hatchi to try to spice up his life, and that sets him on a collision course with Robi when the he takes the first interesting job he hears about and it happens to be collecting money from the very man who told him to try something new.

I’ve watched the first two episodes, I’d have to say it’s a bit like Space Dandy, which I really enjoy, only it seems more a serial style show and less of a “one-off” like Space Dandy is. I’ll be continuing to view this one, it’s funny enough and clever enough to keep me interested.